Bassmaster Classic is coming to Knoxville

The dates of the Bassmaster Classic are March 15-17. [More Information]

The economic impact is typically about $ 25 million with about 100,00 attendance each year. In 2018, the Classic was held in Greenville/Anderson, SC with an attendance record of more than 143,000.

The 52 pro anglers will be limited to Tellico Lake and Fort Loudoun Lake. Fort Loudoun will include the Holston River to the I-40 Bridge and the French Broad River up to the John Sevier Highway Bridge. The two lakes have a combined 730 miles of shoreline and 30,000 acres of water surface. Tellico Lake is about a one hour run from the Launch site in Knoxville.

In early March, the lake levels are at near summer level because of unusual amounts of rainfall. The Tennessee Valley Authority is exercising flood control on the Tennessee River and currently has high discharge rates on Fort Loudoun Dam. The Douglas Lake reservoir and Cherokee Lake reservoir [both above Fort Loudoun Lake] currently maintain high lake levels to help control down stream flow rates.

The 2019 Expo will cover 220,000 square feet of display space in two venues; the Knoxville Convention Center and adjacent World’s Fair Exhibition Hall. The sponsor of the Outdoors Expo will be DICK’S Sporting Goods. The public will be allowed into the Expo beginning at Noon on Friday and 10 AM on Saturday and Sunday. More information on exhibitors and locations 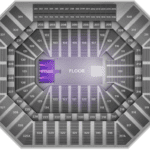 Weigh-Ins will be held at the 21,678 seat Thompson Boling Arena on the University to Tennessee campus – a short walking distance from the Expo and Ft Loudoun Lake. The doors to the arena will be open to the public at 3:15 PM [NOTE – UT has a very strict bag policy for the arena].

We welcome you to Knoxville and hope you might someday return to live on one of our seven lakes.